We had a special Messy Church for Remembrance on Wednesday 6 November thinking about God’s message of love and peace.  There was a Messy congregation of more than 60 people, aged from 3 months to some who were, well, quite a bit older!  We were very honoured to have Ann Perry, Ian Silcox and Pat Alexander with us who shared some of their wartime memories of a very difficult time, reminding us how important it is for everyone to work for peace. They told us how everyday life was completely changed by war; here are a few of their memories:

Ann: We didn’t go to bed in our bedrooms…instead we dressed in our sirens suits, an all in one type of thing. Mine was green corduroy.

Pat: Heavy curtains at windows and doors. Never putting a light on in a room after dark without pulling curtains across first.

Pat: Every aspect of food strictly rationed. Vegetables grown on every available bit of land. A Mars bar would be cut into 7 pieces to last the week.

Ann: Most foods were rationed. As a child of that time sweet rationing was what concerned us most….

Ian: as an 8 year old I was frightened when an aircraft was overhead. An incendiary bomb came through the window of the bedroom where my younger brother and I were asleep. It caught the bed alight, waking us up. We rushed downstairs and quickly left the house with our mother. Our father was on fire watching duties elsewhere and seeing the blaze, rushed home and thankfully with neighbours managed to extinguish the fire.

Pat: We would hear the throb of enemy bombers and wonder if they were passing over on their way to Bath, Bristol or even Coventry. Next morning we would collect the silver foil streamers they had dropped to confuse the defence system.

Ann: We were very scared when we heard the drone of the German bombers overhead…then the whine of the falling bomb… the loud bang on landing and the awful smell of fire and destruction. The exciting bit for us was going out in the morning to hunt for pieces of shrapnel for souvenirs!

Pat: As school children we were expected to do our bit of war work – helping the farmers where we could – potato picking, stoking hay or just leading the horses. VE Day was the day I was sent away to boarding school.

Ann: We had to leave Plymouth during the blitz and schooling was almost impossible. I went to three different first schools and three different grammar schools, which meant we never made lasting friendships. But we survived!

During the session children made poppy crafts, including delicious biscuits and Chris led a very moving worship time of prayer and praise, which started with a rousing sing-a-long of some wartime songs.

We enjoyed a tasty wartime meal of bangers and mash and took part in an unusual sausage quiz, devised by Sue Eve. See if you can answer some of these questions…..

At Christmas, our attention is focused on the birth of Jesus in a Bethlehem cave. It was completely unexpected. The star, which the wise men followed, did not stop at a royal palace, but at a stable used for sheltering animals. Perhaps we are amazed and surprised that God should come to us as a helpless and dependent child, of poor parents far from home, who were soon to become refugees in Egypt? Perhaps we are disappointed because in our search for God we tend to look for the spectacular rather than the ordinary? We should not be. The Christmas story tells us that God is to be found right before our eyes in every day places – in the people and situations that perhaps we take for granted. By choosing to be born in such a humble and desolate place, away from the public eye, and away from the world’s palaces and riches, God turns our worldly understanding of the spectacular, of celebrity and success, upside down. God gives us a clear message about the need to see Grace and goodness among the very poorest people, and in most desolate and ordinary places. This is good news. The first to share with Mary and Joseph the joy of the birth of God’s Son were country people, shepherds guarding their flocks by night on nearby hills. Their presence at the birth was the assurance that God was accessible to ordinary people carrying out their everyday work.

Our celebration of Christmas is more than a remembrance of the happenings in Bethlehem over 2000 years ago. It is a reminder that God loves us so much that he sent his only Son to be with us, to show us the ways of God, and to journey with us in our lives.  That night, a new-born child became our living link with God.

Christmas focuses not only on what Jesus did by making his home with us, but on what we must do also, for it reveals that we are part of God’s family. This means that we should reverence each human life, and that raises tough questions about our treatment of other people. As Christmas approaches, we are invited, once again, to celebrate God who makes himself known to us.  The simplicity of it challenges us to rid ourselves of falseness and pretense, and to recognize, in the new-born child, a Saviour who will show us a new life with glorious possibilities. We need to be a part of the story ourselves, and we need to rediscover the joy and wonder of the Christmas message. God comes to us to show us how to live and how to love.  Our life, all human life, is part of this story; it is the story of God’s care and concern, and of involvement with the world in which we live.  As God’s Son, Jesus comes into all the complexities of human living and shows us that, through his birth, life, death, and resurrection, we can all share in this new life. Life can be different, and life can be changed. St John, speaking about the birth of Jesus at the beginning of his Gospel, says this: “The light shines in the darkness, and the darkness did not overcome it.” As we celebrate the love of God seen in the Christ-child this Christmas season, may we all come to know the good news of the Christmas story and be transformed by it.

May the joy, peace and love of this season be yours.

Christ came down to earth from heaven, born for us on Christmas Day.

On a side table in our sitting room is a small host of Angels. The Angels were presents given to me when I was ordained, first as a Deacon and then as a priest. These angels are beautiful, all different but each one a reminder of God’s messengers. Angels, heavenly beings created by God. Cherubim and Seraphim. The word “an.gel.os” (angel) comes from a basic word that means “message- bearer”.  An angel is a messenger from God.

In the Bible only two angels are specifically named: the archangel Michael who is mentioned in Jude 9, Revelation and Daniel, and the angel Gabriel whom we find mentioned in the book of Daniel and who comes from God to speak to Daniel. The angel Gabriel is God’s messenger in the incarnation story; it is Gabriel who tells Zechariah “I am Gabriel. I stand in the presence of God and I have been sent to speak to you and bring you good news (Luke 1:19). Gabriel prepares Zechariah for the birth of his son, John, to his wife Elizabeth, Mary’s cousin.

It is Gabriel who was sent by God to Mary to tell her of God’s favour upon her. Mary received God’s message and reassurance, and accepted God’s message, ‘Here I am, the servant of the Lord; let it be with me according to your word’ (Luke 1.38). In Matthew 1 Joseph, described as a righteous man and unwilling to expose Mary to public disgrace, planned to dismiss her quietly. An angel of the Lord appeared to Joseph in a dream, giving him God’s message: this baby will save God’s people from their sins. Joseph did as the Lord commanded and took Mary as his wife.

And so God’s plan for the world was put into place, aided by his angels. Mary’s baby, the Christ child, was born in Bethlehem and was called Jesus, the name given by God, told by the angel.   It was an Angel (thought to be Gabriel) who visited the shepherds in a blaze of God’s glory, the light of God’s presence and power, accompanied by the Heavenly Host praising God and saying ‘Glory to God in the highest heaven’ (Luke 2. 14).  To the least of earth’s inhabitants, the shepherds, the poorest of God’s people, to them first came the sound of the Christmas angel, a song of Good News.

The spirit of the Lord God is upon me,

Because the Lord has anointed me to preach good news to the poor,

To bind up the broken hearted

To proclaim freedom for captives and release darkness for the prisoners

To comfort all who mourn

And provide for those who grieve in Zion

The sound of the Christmas Angel was a chorus of Good News, and what good advice for us all.

What is the meaning of the Good News of the Christmas Angel? Is there a difference this Good News will make in our lives?

The good news spoken by the Christmas angel means that God has heard the cries of the world.  God has heard, and He has given, and because of that we can find meaning and hope, and our lives can be filled with peace and assurance.  No matter what crisis we face, Jesus Christ born long ago, God who became man and lived and died among us, knows us and how to meet our needs.

May we all say yes to God and make space to stop, to pray and listen and hear the Angels sing this Christmas tide. The sound of the Christmas Angel was not just Good News; it was the very best of News this world has ever heard.  Out of love God came down to earth from heaven, born for us on Christmas Day.

May God bless you this Christmastide.

We are pleased to announce the release of the parish magazine for the month of December 2019. Some featured articles include: 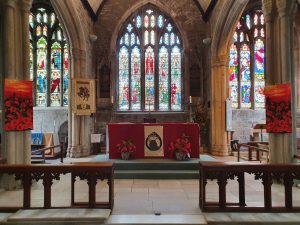