You are here: Home / Archives for Mandy Betts

On the 15th August, the Church celebrates the Assumption of the Blessed Virgin Mary. The Feast of the Assumption sets before us the final act of Mary, the young Jewish girl from Nazareth, who gave Jesus to the world, and was spared death. A messenger from the Lord announced that she was to be the bearer of the Son of God to the world, and her response was: “Let it be according to your word.” We are inclined to forget that Mary had little idea of what faced her when she responded to God’s call. It was with faith and trust, but with little knowledge, that she kept going, seeking to discover the hand of God in what was happening around her. Mary’s natural obedience to God and reverence for his word showed her worthy to be the bearer of “the word made flesh.” As a woman with a human heart and human personality, she experienced all aspects of everyday life – its joys and its pains. We know of Mary’s journey to visit her cousin Elizabeth who was expecting a baby, and we know of her presence at the Cross. From Jesus’s birth to his death, Mary is present.  In Mary we see the fullness of response we are asked to make to God in our lives. She recognized the greatness of God working through her: “The Almighty has done great things for me…” Her Assumption into heaven should inspire us to see the worth of making every effort to live life as fully as we can in obedience to God’s word, for Mary is a living symbol of what God calls us to be. As we journey on our own pilgrimage, Mary’s ministry of “presence” has much to teach us, as she points us forward to where we hope to be.

Almighty God, who looked upon the lowliness of the Blessed Virgin Mary and chose her to be the mother of your only Son: grant that we who are redeemed by his blood may share with her in the glory of your eternal Kingdom: through Jesus Christ your Son our Lord, who is alive and reigns with you, in the unity of the Holy Spirit, one God, now and for ever. Amen

With my love and prayers,

Religion places time and timelessness together, places them in parallel. Not that they can stay together for very long. Our time runs out, our timelessness runs nowhere, for that is its property. It just is. When God became man to enter what he had created, being now human he experienced time. The incarnation was God’s experience of being born, growing up, becoming a citizen of a certain country, being loved by his particular family, becoming a teacher, a spiritual healer who challenged local laws and customs, and having to experience local justice. All this within the bounds of time.

The gospels are most careful to state when and where Jesus was in time; the historical Jesus, as the biographers call him, is set fairly and clearly within his times, just as each one of us is, as our birth certificates, bank accounts, national health cards and passports show, not to mention the Baptismal register. So here we are on the earth, that tiny speck in the great universe of God’s creation, fully documented and date stamped all over.

Whilst here on earth Jesus showed scant respect for time. He criticised those who allowed it to dominate their lives in such a way that they hadn’t the time to take their time, not having a spare minute, let alone a spare hour. We are guilty of this too.  ‘Congratulate me,’ the busy person says when they tell us, ‘I never have a minute to myself, I don’t have time to turn around, I just managed to get everything done in time.’

Time is at its grandest and most awe inspiring in the Bible. First, from the letter to the Hebrews, consider that glorious opening chapter which begins ‘God, who at sundry times and in divers manners, spake in time past unto the fathers by the prophets, hath in these last days spoken unto us by his Son’. And then the even more stupendous opening of St John’s Gospel, ‘In the beginning was the Word’. Both writers run time and timeless, mortality and immortality, the temporal and the eternal, side by side, like twin tracks on a railway line, one going as far as the terminus, the other out of sight. The incarnate one arrived at a moment when it became agonizingly plain to him that his earthly existence was over, that he had completed the task that his Father had set for him, his work was finished and also his life in time. The redemption we call it, this divine work. To redeem means to buy back, usually at a high price; we have been repossessed by God and now we can take our place at the table of his family, the church, where although the old church clock clunks and chimes its way through the service, there is no set time. We have stepped into the immeasurable, into that time for everything the bible calls rest.

We have nailed mortal time down to the split second, to the carbon-tested age of a tree stump, put down as what is a marker in what is now Norwich, which was growing when Abraham pitched his tent at Bethel, and to an exactitude which previous generations would have found a burden. For them it was daybreak or noon or evening or night. It was spring or it was summer, autumn, winter, and so life went on, sans minutes and hours for the most part. The sun came up, the sun went down. The tides went out and the times came in. The birds flew away and only God knew where. Then a great gold clock was fixed on the Parish Church and its hands told everyone when to start and when to stop, and Time ruled the roost.

The preacher of Ecclesiastes offers philosophy of Time – the best there is. He is, among other things, the master of weariness, of disillusionment. He has done it all, seen it all, had it all. The preacher allows time for everything, but it is in an allowance. There follows logically a time to cease doing this, or being that, sad though it is, and reading his beautiful statement we have to agree. There Is a time to weep and to laugh, a time to embrace and a time to refrain from embracing, a time to keep silence and a time to speak, a time to be born and a time to die. There is in a lifetime a time for everything once we have learned to find the time, and that is the secret.

Wishing you all a happy summer time.

We are pleased to announce the release of the parish magazine for the month of August 2019. Some featured articles include:


We are pleased to announce the release of the parish magazine for the month of July 2019. Some featured articles include:

‘The Rt Rev Jackie Searle, Bishop of Crediton, the Patron and Parish Representatives are delighted to announce that, subject to the completion of the statutory formalities, an offer of the post of Rector of the Holyford Mission Community (comprising the parishes of Colyton, Musbury, Southleigh and Branscombe) and Priest-in-Charge of the parish of Northleigh, has been made to the 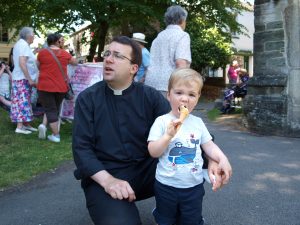 Reverend Dr Steven Martin, who is currently Assistant Curate in the United Benenfice of Tavistock, with Gulworthy and Brent Tor, and that offer has been accepted’.

Vicar Chris said: ‘We are delighted with this news and send our warmest congratulations to Steven and his family. We wish him, Caroline, Henry and John every future happiness in their new lives.’

Arrangements for Steven’s final service and date of induction/licensing will be announced as soon as they have been agreed.