You are here: Home / Archives for News

St Eustachius’ Church has been awarded a grant of £2,000 by the Ouseley Church Music Trust to promote and maintain the high standard of choral services at the church.  The grant will contribute to the salary of the Director of Music at St Eustachius’, Scott Angell.  We are extremely grateful to the Trust for this award.

Appointed at the beginning of this year, Scott has been enthusiastically bringing new developments to the church with his high quality organ playing and breadth of his repertoire, together with new anthems and activities with the choir.  Already the choir has several new members and there is room for more.

Scott said: “I know I am biased, but Tavistock church has one of the best choirs in the area and they show how music can be really uplifting in the service of God”.

Following the installation of a new boiler at St Eustachius’ Church, the heating system is to be further improved with the help of a £1,000 community grant from Devon County Council, for which we are extremely grateful.

Improvements will provide benefit to all the community who use the church, and are to include cleaning and refurbishing radiators, with a new one in the vestry toilet, balancing heating in the Vestry, relocating the header tank to the Vestry roof space to eliminate the damp threat to robes, an alarm for the boiler room sump pump and replacement of water supply lead pipes.

More about the boiler installation:

The old boiler had been causing problems for some time and Tavistock based company, DB Heating Ltd, was commissioned to replace it. Last year, after several weeks of no heating, the long-awaited replacement finally fired up on 21 December, just in time for Christmas services. The installation works (which required a new stainless steel chimney flue) cost nearly £30,000, part-funded by the church and made possible by the generous support of The Friends of St Eustachius’.

In an article in the Tavistock Times of June 6 this year, DB Heating of Tavistock director Lawrence Barnes spoke about the challenge of integrating the new 21st century system with the original Victorian network of pipes and connecting with the existing flue system to comply with the necessary standards. But, he said: ‘The new, high-efficiency boiler with a heat exchange system means that the new boiler system can integrate with the Victorian pipes that run throughout the church. The boiler has a closed circuit and heats the water in the pipes through a heat exchange plate.’

The article explains that the British-made boiler is 150kW (when a domestic boiler would be 30kW) but referring to running costs Lawrence reassures: ‘It only uses the minimum amount of gas to heat the interior because it reads the outside temperature and heats the church accordingly’. 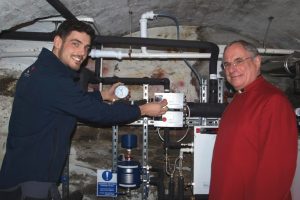 Head of Fabric at St Eustachius’, Nick Clark, explained why the new heating system took longer than expected by some parishioners. The final design for the replacement boiler was approved in 2017, while urgent re-roofing work was underway to the Vestry roof.  The new boiler required a new stainless steel chimney flue liner and to avoid having to erect scaffolding above the vestry a second time, it was agreed it would be more cost efficient to incorporate it into the roofing contract.

He said that despite the inevitable delay, the Church was grateful to both the roofing company, JB Roofing, of Tavistock, and to DB Heating that no overall increase in cost was necessary, adding: “We’re extremely grateful to DB Heating for delivering a quality system for the church, and for their dedication in ensuring it was up and running in time for the Christmas services.’

The Very Reverend Dr Christopher Hardwick being introduced to the new boiler!

led by The Venerable John Reed

“Let me seek you in longing; long for you in seeking.

let me find you in love and love you in finding”

This day provides time and space away from your daily surroundings and preoccupations. It is a time for God and you. So, I will aim to keep verbiage to a minimum and let music and silence become the better vehicles for the refreshment of your soul. Advent has been described as ‘the time for adults to prepare to let in the child’. Advent recalls God’s ‘adventure’ – the time leading up to his coming to us in The Word made Flesh, the child of Bethlehem, Jesus. I encourage you to take this time away before the start of Advent and look forward to sharing it with you.

Please sign up at the back of church if you would like to attend the Quiet Day, or let the Parish Office know (01822 616673). The cost of the day per person is £15 to include refreshments, but not lunch.  If you need help with transport, please let us know. We shall be based in the Dart View No. 1 meeting room in the Conference Centre at Buckfast Abbey.

Following the plan to do more fundraising there is to be an Auction of Gifts and Talents in the Town Hall on Friday 19 October at 7 pm. It is open to everyone. So far, there are many kind offers including a weekend for two in a local delightful holiday cottage, deliveries of logs, therapies, gardening, silver cleaning, wines, baking, pictures, etc. Tickets, £4, will soon be available to include a drink and a catalogue of bid items. This is to help raise funds for our Church. Drakes Auctions will officiate and value your gifts. If you have a gift to offer, a talent or professional service for an hour which can be auctioned, please get in touch with me on 610262, or leave a note at the Parish Office for me to contact you. Pat Warne

Construction work is due to begin at the Catholic Church from September which means the building will be closed to the public from Monday to Friday each week. Following a request for help from Fr John, and having sought agreement from Bishop Robert, the PCC and I have agreed that Tavistock Parish Church may be used on a temporary basis to enable their midweek services to take place on a Monday, Tuesday and Thursday morning. Chris Hardwick

Following last year’s highly successful appeal, we will again be donating any produce to the Tavistock Food Bank. We would also like to support the Shekinah Mission with any financial donations.

Thank you once again for your support. Hilary Johnson

There will also be a craft stall. Please come and support us. Craft Group

CDs and DVDs wanted for sale at our Friendly Friday coffee mornings. Please leave in the Parish Office. Thank you. Shirley Martin