You are here: Home / From the Parish / ‘Last Night of the Proms’

The HMS Drake Royal Naval Volunteer Band effectively formed in the late 1970s when a small group of Engineers started playing for weekly prayers at the Royal Naval Engineering College (RNEC) at Manadon on the outskirts of Plymouth.  The band thrived and not long after, a Royal Marine Bandsman was appointed to the band as their full time conductor and instructor with the band becoming one of a number of recognised “Volunteer Bands” within the Royal Navy, mainly in shore establishments but extending to include the groups on the Carriers (Ark Royal, Invincible and Illustrious) and more recently on the new HMS Queen Elizabeth. When RNEC Manadon closed in 1995, the band became the Devonport Naval Base Volunteer Band and moved into HMS Drake, where it continues to be based today.

In the early days, the band was primarily made up of Service Personnel but as the Navy reduced in numbers the membership widened as did the number and type of gigs undertaken.   Nowadays, as the name implies, the band is made up of unpaid volunteers consisting of serving and retired members of the armed forces, their families, members of the emergency services and a wide range of civilians all bound by a love of music and desire to perform in a military wind band.

Last year, unfortunately the decision was taken to withdraw the instructors from the volunteer bands although the Royal Navy and RM Band Service continue to support us in a number of ways.  The Royal Naval Volunteer Band Association (RNVBA) has been formed to cover the activities of the 9 remaining volunteer bands (spread from Faslane to Culdrose) and support them as they struggle to maintain their musical standards, military ethos and in some cases, their existence. All of the bands have been forced to change the way they operate and have followed slightly different models depending on their location and availability of funding.  A number have been able to fund part time conductors via sponsorship or through grants, however, in the case of the Devonport band, we have had to become fully self-funding, needing to earn enough through our performances and any local sponsorship we can find to support our activities.   HMS Drake has continued to provide us with a venue and support us administratively, the Band Service provide us with instruments and we now manage ourselves through a committee.  A year after these changes came in, we are pleased to report that we are still actively performing and are planning a number of high profile gigs in the coming year on top of our normal “bread and butter” engagements. 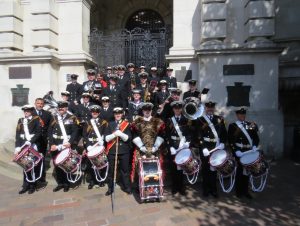 Within the band, we are lucky to have a strong and very capable Corps of Drums who perform with us for big events but also stand-alone providing drummers and buglers for a range of events around the Plymouth area.   You may have seen them recently performing a sunset routine on the Hoe or dressed in period costume leading dancers and pirates through the Barbican.  Their bugling was rightly picked out for special mention by the RM Band Service Director of Music at the Volunteer Band inspection in Portsmouth, as being as good as some of his professionals!

We continue to support the Royal Navy, providing background music for both Naval and Civilian functions in the Wardroom and Senior Rates messes, as well as performing “Beat the Retreat” and “sunset” ceremonies not only within HMS Drake but also in Stonehouse barracks and HMS Raleigh.  We have also managed to support the local community with highlights of the last year including support to the naming ceremony of their new RNLI lifeboat (televised), the Plymouth Mayor Making Ceremony, Torpoint carnival (and their Armistice Day parade) and “Proms in the Park” in the bandstand in Devonport Park.

The next few months sees the band reprise their “Proms in the Park” (Devonport park on Sunday 1st September) and then build up to a big event with their version of the “Last Night of the Proms” in St Eustachius’ Church in Tavistock on Saturday 28th September.

The coming year also has some exciting events currently in the early planning phase, with potential performances by the band in the Tower of London and at Jersey in the Channel Islands being obvious highlights.  There are also plans for massed band performances bringing together elements from all the volunteer bands with the RNVBA providing a band for the RNA (Royal Naval Association) parade in London and an aspiration to bring a massed band event to Plymouth as part of the Mayflower 400 celebrations; all in all, 2020 is building to be an exciting year for members of the HMS DRAKE Royal Naval Volunteer Band.