Here is a copy of the Press Release about Rosie Illingworth:

New Lay Minister Rosie Has the Young at Heart 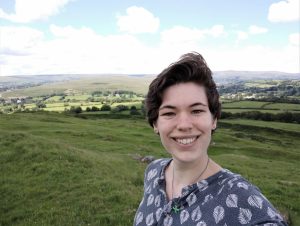 Licensed lay minister, Rosie Illingworth is busy introducing herself to the people of Tavistock Parish as she prepares for her ordination in September.

Training as a priest under the eye of Tavistock Parish Church vicar, the Very Rev Dr Christopher Hardwick, Rosie is looking forward to her ordination on September 12, when she will become a deacon.  She will then take up the post of assistant curate, when she will be able to preach, and divide her time between St Eustachius’ Church, St Michael’s, Brentor and St Paul’s, Gulworthy.

About her new role, she said: ‘I am keen to get to know as many people as I can, explore the surroundings of this beautiful area and work out what I can get involved in.’

Rosie is particularly interested in connecting with young people.  She hopes to work with schools and more specifically, with a recently-appointed Children and Families’ Worker, welcoming new parents and children to the area.

Aged 28, Rosie comes from a small village near Oundle in Northamptonshire.  She grew up going to a Baptist Church and said: ‘I thought church was dry and dusty and you left it in the corner’ She added: ‘I was one of the kids who was probably a bit of a pain, asking all the questions and not necessarily being alright with the answers.’

Her calling to the priesthood was inspired by her working experiences after school.  She did a one-year placement as a volunteer at Launde Abbey in Leicestershire, where she said, ‘I was a general dogsbody, washing up and doing lots of odd jobs, but I got to meet with so many people and see a different side to the Church of England.  While there, I ended up feeling much more at home in The Church of England.

‘I was 18,19 then, and over the course of that year I began to realise that I loved holding space with people in worship.  People would come to me and tell me their stories.  We would work out where God might be for them.  It inspired me to get ordination’.

She moved to Exeter, where she studied Theology as an under-graduate for three years and found it “really engaging”. ‘I enjoyed it because, like I said when I was little, it gave me space to ask all the questions and I did not have to be satisfied with the simple answers.’

Halfway through her third year, she began thinking more seriously about becoming a priest.  Following her Bachelor of Arts degree, she pondered further while working for the Bishop of Coventry as a pastoral assistant.  Her role included helping organise his diocesan work, hospitality and assisting with research in his capacity in the House of Lords.  Rosie then decided to apply for ordination and was accepted for training. But wanting to feel 100 per-cent sure she decided to return to Exeter and took a job in mental health with the NHS Devon Partnership.  She found talking to “people who were stressed and anxious” gave her good insight into her calling as a priest.

After two years she went to Cranmer Hall Theological College to study a Master of Arts in Theology and Ministry.  There, besides her academic learning, she had several placements in churches involving both pastoral care and preaching.  She is now in her final year and as she joins Tavistock Parish ministry, Rosie will be completing a 50,000-word thesis.

Joining the parish, she said: ‘I am excited for what my ministry can look like and what I can learn and offer to Tavistock, Gulworthy and Brentor.  It’s about getting to know people – a good challenge.’

With her interests it sounds as if Rosie will rise to the challenge admirably. ‘In my time off I enjoy walking and running – I completed a half-marathon just before Lockdown.  I like board games with friends and I’m partial to a pint down the pub.’